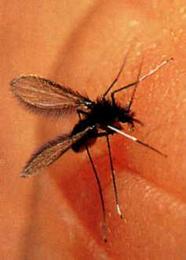 Sandfly is a colloquial name for any species or genus of flying, biting, blood-sucking Dipteran encountered in sandy areas. In the United States, the term “sandfly” may refer to certain horse flies that are also known as "greenheads.” Essentially any fly found on a beach will be called a "sandfly" in the United States.

Identification
Sandflies are at least 1/16 of an inch long and colored gray or black. Their small size allows them to travel straight through the 16-mesh screening on many windows and porches. They have one pair of spotted wings and many segmented antennae. Most often, they look like the common housefly to the untrained eye however, they are quite weak fliers and as such they usually have to hop.

Habitat
Mostly, this pest is found living in most soil, stone walls, or in rubbish heaps. In these areas they may acquire infection from human or reservoir species such as rodents, dogs, or primates.

Diet
The sandfly is most attracted to human flesh. Typically they feed at night and only have 2-3 blood meals during one lifespan which is only about 2 weeks. It is important to note, however, that only the female sandflies actually suck blood.